We will be setting up new leagues soon in our new location – stay tuned for announcements!

LEAGUE STARTS WED June 29, 7pm – it will go every Wednesday for at least 10 weeks – once you sign up you’ll be on our mailing list of announcements and details

Leagues will be every Wednesday, 7pm at the Broad theater, starting June 29.  You do not need to attend every league event.  Players will qualify for the finals based on points of the top x nights they participated in.  The more you show up though, the better your chances to get more points. 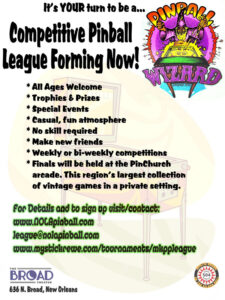 Register For the League Here:

There is a $20 registration fee – this goes to cover IFPA fees and prizes for award winners in the finals.

Note that users will be responsible for credits on the games during competition – standard game prices will be in play, typically from .25 to $1 depending upon the game.   There will usually be prizes for winners of each weekly competition (i.e. free movie passes, etc. – limited to the same person no more than once per 2 weeks).  There will also be drink and food specials during league tournaments – check the Broad Theater for more details.

Register here for league ($20) – no other charges except to play games at the locations.

If you have an old pinball machine -- in any condition, consider donating or selling the game to us. We will restore it to its former glory and share it with others. For more info Contact Us!
Join our YouTube channel!
Click here to See our library of videos of past concerts and other performances.
We rent/operate arcade machines and make our resources avilable for special events!
Our collection of games, our museum and our expertise in restoring, maintaining and operating the South's largest collection of vintage coin-op machine is available to partner with others in the area! If you're operating a corporate event and looking for a truly UNIQUE venue or need vintage or modern games, or have a movie production that's looking for special items for set decoration, WE CAN HELP! We have extensive experience doing movie productions as well as corporate events. We are also looking for a public venue where we can set up a very special, unique array of vintage pinball and other devices. We can offer a very attractive and lucrative arrangement with someone in the area who has experience and resources! Club owners, investors, entrepreneurs, restauranteurs.... contact us to set up a meeting and let us show you how to have one of the most unique businesses in the country. Location won't matter. People will come from hundreds of miles around to visit this place. If you have resources and are intrigued, Contact Us
Active Projects
Below is a sampling of the active projects taking place within the Mystic Krewe. These are not all that's going on. If you would like to participate, contact us.
Want to help?
In our quest to celebrate learning, creativity, responsibility, personal advancement, sharing and helping each other and our community. Please consider giving what you can. Any token donation goes a long way in helping cover our expenses and increase our impact on the community. It means so much!