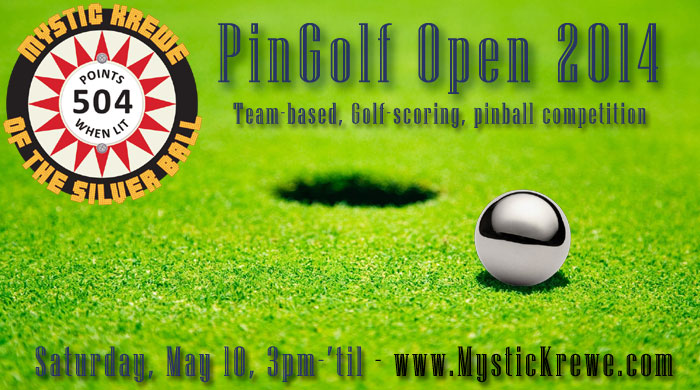 On Saturday, May 10th the Mystic Krewe will be hosting an IFPA-sanctioned tournament, from 4pm ’til at our famous PinChurch.

PINGOLF is a fun, new way for people to compete individually and play in teams, encouraging more-skilled players to help those new to the sport. We will play a round of 9 “holes” of golf on 9 different pinball machines, each with its own objective, and the players who reach each machine objective in the lowest number of balls played, will record the better scores. The team with the best overall (low stroke) score will win the team competition, and the top 8 individuals will compete for the top individual champion slot. Prizes and cash will be awarded both in team and individual play.

NOTE: All participants must pre-register! Teams will be assigned ahead of time based on player rankings so we need everyone to be signed up by May 8th!

NOTICE: We already have 20 competitors signed up (5 teams). Registration is now closed. It may be possible we allow more people to compete but only if we have 4 more players to complete a team. If you are interested, use the “contact us” form on this site. If you can complete an entire team yourself, let us know – we may be able to accommodate you. Registration is $30 per person for non-club-members.

PINGOLF RULES
Want to Join Us?
The Mystic Krewe is looking for creative, passionate, ethical, progressive people to join our ranks and help us create a fun and friendly organzation. We like to socialize and play games, but also learn, teach and share, and collaborate on business ventures and other projects. If this sounds interesting to you, consider petitioning to become a member. Check the topics on the upper nav bar under "About Us": "FAQ", and "Membership" for more information, then Contact Us to set up a meeting and tour!