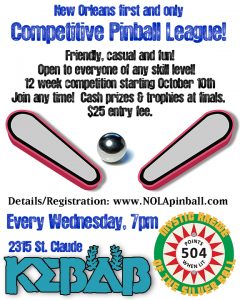 The Mystic Krewe Pinball Parlor league is now forming! Have you ever wanted to play competitive pinball? Come join our weekly league – open to all regardless of skill level!

Competitions are weekly, every Monday. Don’t worry if you can’t make all the events. The league will go on for several months. Prizes for winners each event. Play one event, or play more! Get your name in the world pinball database and receive a seed/ranking!

Cost is $20 one-time fee to join the league. There may or may not be a small fee per each individual competition – this is at the discretion of the league night director (some nights there may be a cash prize for the winners). All league participants will be invited to a special private party at the Mystic Krewe’s PinChurch in association with the season-end finals.

There is a one-time fee of $25 to sign up for the league. There are no other costs except quarters to play the games in the tournament (typically set for .50/game). Additional prizes will be given out to final winners along with trophies for each week’s winners.