A lot has been going on in the past few months and we’ve been remiss at going into the details. We’ve held a number of fundraisers, tournaments and hosted countless gatherings and events with both locals and people from around the world who have wanted to visit our fabulous makerspace and private studio.

We are also gearing up for the second-annual Louisiana State Pinball Championships, held at the PinChurch. 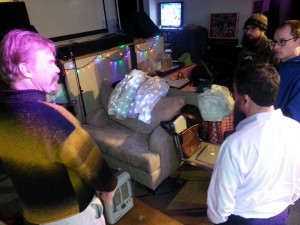 We are now more than half way towards meeting our membership quota. When we do, the group will be more exclusive and picky about future members – we feel keeping the core membership a modest size means we can focus more on personal relationships and group projects as opposed to the endless fundraising that many of these types of organizations become mired in. So if you’ve been thinking of joining, now is the time! Even if you’re not local, there are a myriad of benefits of becoming a member – and eventually we hope to spawn regional clubs in different areas.

We’re setting up a dedicated podcasting station for people to produce their own shows; making progress on the public arcade project and talking with several different groups who want to partner with us to bring a high-class, large-scale pinball parlor to the city, working on acquiring new technology such as 3D printers and CnC equipment, and forming new sub-groups (we call “cartels”) on everything from gaming to beer brewing.

The MK has been working with the Krewe of Chewbacchus and helping various sub-krewes with design and development of custom micro-controlled LED costumes and systems, our own in-house “Project Lightbox” which is designed to illustrate a variety of aspects of industrial design, manufacturing, merchandising and related skills. We’re continuing to learn and produce videos of artists, and in the next few months we have even more high-profile artists that will be coming to our place — stay tuned for more!